Winery Find welcomes Aussie Brewery Tours, in Brunswick for all your entertainment and wine tasting venues.

Aussie Brewery Tours are not just about drinking beer, its about the combination of tasting cider and eating great food as well. Aussie Brewery Tours love beer and cider and visit some of the countries best beer makers. They combine great food, comfortable transport, amazing beer and cider with knowledgeable guides dedicated to the history of the local region and beer and brewing. They guarantee guests will have the best experience possible. Australia has long prided itself on being a beer-drinking nation. Melbourne's first mayor was a prominent brewer, Henry Lawson wrote of his love of the amber nectar and former prime minister Bob Hawke held a world beer drinking record. Australia's favourite pastimes are the beach, the barbecue, the pub, sport and hanging out with mates, this just would not be the same without beer. Aussie Brewery Tours are currently running from Melbourne City Centre six days a week, closed on Tuesdays. They visit two regions, an inner city tour on Wednesdays and their Yarra Valley Cider and Ale trail tour all other days of the week. Both tours include three to four breweries, lunch, tasting paddles, brewery floor tours and of course beer and cider! Aussie Brewery Tours are always fun, friendly and relaxed as they believe that is the only way to enjoy a beer. 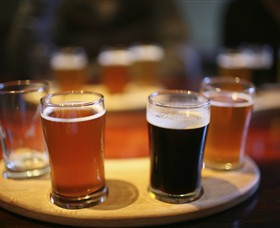 Aussie Brewery Tours, Brunswick VIC 3056, and our community if you live in Brunswick or simply visit our wonderful town. Why is it important toClaim my Listing

When You CLAIM OR ADD A LISTING you receive Missed phone calls and Client Emails from Winery Find plus dozens of partner sites. Gain access to your clients now and Rise through the Rankings on Google and Winery Find.